We offer 24/7 transfer service between Rome and the Airport. If you do not want to wait for public transportation, Uber, or common taxi service, you can book with us and have a very safe trip in the comfort of our luxury cars park.


We can pick you up at any hour of day and night and transfer you to the desired location at a reasonable price, for larger groups please use the custom fare service.

Ciampino–G. B. Pastine International Airport (Italian: Ciampino–Aeroporto Internazionale G. B. Pastine) (IATA: CIA, ICAO: LIRA) or simply Rome Ciampino Airport, is the secondary international airport of Rome, the capital of Italy, behind Leonardo da Vinci–Fiumicino Airport. It is a joint civilian, commercial and military airport situated 6.5 NM (12.0 km; 7.5 mi) south southeast[1] of central Rome, just outside the Greater Ring Road (Italian: Grande Raccordo Anulare or GRA) the circular motorway around the city. The airport serves as a base for Ryanair and general aviation traffic.

Ciampino Airport was opened in 1916 and is one of the oldest airports still in operation.

During World War II, the airport was captured by Allied forces in June 1944, and afterward became a United States Army Air Forces military airfield. Although primarily used as a transport base by C-47 Skytrain aircraft of the 64th Troop Carrier Group, the Twelfth Air Force 86th Bombardment Group flew A-36 Apache combat aircraft from the airport during the immediate period after its capture from German forces.

When the combat units moved out, Air Transport Command used the airport as a major transshipment hub for cargo, transiting aircraft and personnel for the remainder of the war.

It was Rome's main airport until 1960, with traffic amounting to over 2 million passengers per year. After the opening of Leonardo da Vinci–Fiumicino Airport, Ciampino handled almost exclusively charter and executive flights for more than three decades. However, the terminal facilities were extended at the beginning of 2007 to accommodate the growing number of low-cost carrier operations. 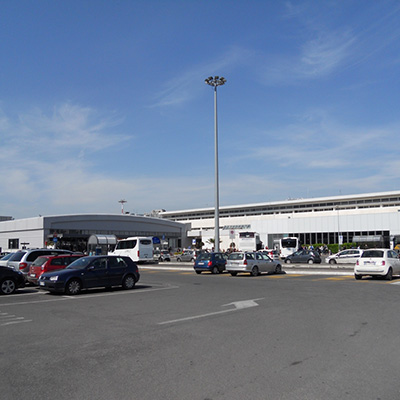